What Really Happened In The Genesee Hotel in 1942

What Really Happened In The Genesee Hotel in 1942

Many creepy and scary stories on the internet today stay with us much longer than we expect them to, freaking us out. However, amongst all other creepy stories, one of the scariest and unnerving stories is probably the 1942 Genesee Hotel story. Read on to find out more about the incident and why it has managed to speak to people decades after it transpired.

Before the internet was commonplace, only a few people had access to journals, photographs, and other historically important documents. Information sharing was fractured and more difficult. However, the 1942 photograph, which made headlines for various reasons, has since then been commonly shared across multiple social media platforms today. 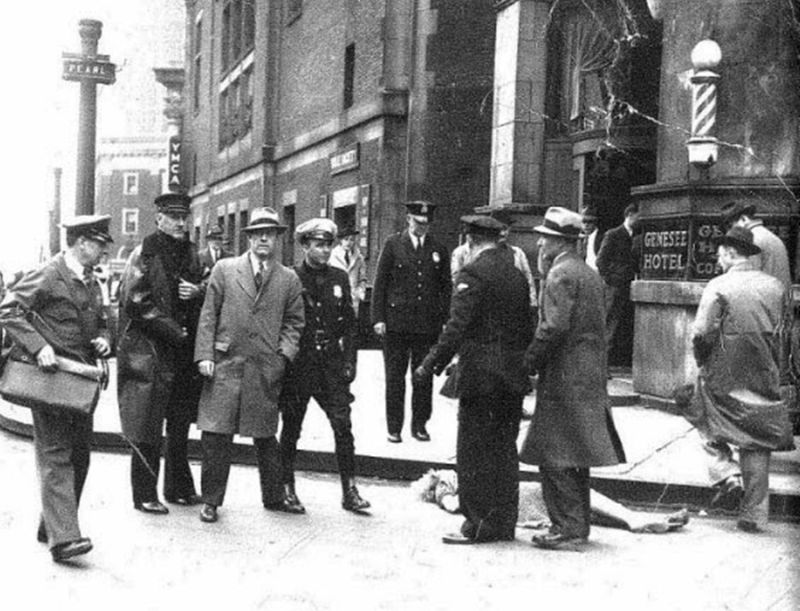 Content Summary show
The story
About the woman and some contextual background
Why is the photo morbidly intriguing?
Use of the photograph in psychological studies
Do we know why Mary decided to take such a drastic step?

This fateful incident happened on May 7, 1942, when a photographer, namely Russel Sorgi, for a magazine (Buffalo Courier Express) based out of New York, was returning to his workplace after completing an assignment. He, unlike normal days, decided to take another route to save time, only to find a bunch of police cars on his way. Being a journalist, Russel Sorgi chose to follow the police vehicles. They soon reached the Genesee hotel, where they witnessed a woman sitting on a ledge on the 8th-floor window.

Something told the journalist that all was not well because he decided to start photographing the situation. He quickly grabbed his camera, clicked a photograph, then clicked another, capturing a morbid and scary situation about to unfold. Sorgi took four pictures of the problem. He was one of the many eyewitnesses who saw the woman throw herself off the ledge to her death below.

About the woman and some contextual background

Ms. Miller was a guest of the Genesee hotel and had checked into the Genesee claiming to be from Chicago. However, she would not be spending any time in the hotel because as soon as she checked in, she entered the women’s restroom and stepped onto the ledge. M Miller, or Mary Miller, was from Buffalo, United States, and is said to have been living with her sister. It is alleged that Mary Miller told her sister that she was traveling to visit some people she knew in Indiana and instead ended up checking into the Genesee.

Given that there were no reliable electronic records available back then, we do not have too much information about Mary Miller. What is truly shocking is that her sister had no sense that Mary was depressed or about to commit suicide. Even more disturbingly, Mary waved to the crowd before jumping to her death from her ledge.

Although the picture taken was termed the “Despondent Divorcee,” it is unclear if Mary was even married. Apart from the Buffalo Courier, the view was also published in other publications such as the Life magazine and the New York Times. It is said that Mary Miller was neither married nor involved in a romantic relationship. It is also unclear why she would commit suicide because no suicide note was recovered, nor why she would choose to die in such a brutal manner amongst many onlookers.

Why is the photo morbidly intriguing?

The photo is historically important for reasons other than suicide. This incident transpired during the 2nd World War, and the policewoman who rushed inside the hotel to help Mary was probably one of the state’s first woman law enforcement officers. The war propaganda poster also adds to the historical value of the photographs.

Most likely, a Graflex Graphic Speed Camera, which was commonly used in 1942 for newspaper photography, was used by Sorgi.

Use of the photograph in psychological studies

Given the interesting anecdotes behind the photograph, It was used in a psychological study. Surprisingly, 96% of the study subjects did not notice Mary’s fall upon the first examination.

The psychological study hypothesized that the human brain blocks out certain elements or impulses unless the brain is already aware that such a picture is about to be shown to it. For instance, the study says that the visual system adopts strategies and observes stimuli that it is already familiar with and tends to ignore those it is not primed to notice or witness.

However, many people theorize that many people fail to notice Mary because her body is lined up with the horizontal lines of the building façade rather than it being reflective of any underlying psychological phenomenon. Further, people could easily identify her jumping body, if they were already aware of what to look for in the picture, making the theory of the psychological study somewhat plausible.

When this picture is discussed, many people wonder if Mary regretted it after jumping. When this conversation happens, many people highlight that she waved to the crowd below before jumping to her death. Still, statistically, it is said that most people who survive a suicide attempt feel that they regret it the moment they attempt it.

Do we know why Mary decided to take such a drastic step?

Unfortunately, despite the picture being this famous and the story having lasted many decades, we still do not know why Mary decided to take such an extreme step and end her life. Her sister stated that she only told her that she would visit a couple of her relatives in Indiana and did not show any signs of depression or sadness.

However, because no note or letter was recovered, we still do not know why Mary decided to end her life. Some people theorize that the fear of losing the war may have led to depression and Mary jumping, but this has not been factually verified.

The only thing for certain that we know is that Mary was not married and was not in a relationship. The title “Despondent Divorcee” was not a factually appropriate title for the extremely sad picture.